No, as they are now a very domestic, household animal, betta fish are obviously not very affected by habitat loss. But I think they are an interesting example of how habitat loss can affect animals. For anyone who doesn’t know, betta fish (also known as Siamese Fighting Fish) are ridiculously territorial, to the point that you cant even have them in the same bowl without them killing each other. Obviously they aren’t the only territorial animals in nature. What if habitat loss for animals in nature has the same effect as putting all my precious betta fish in one bowl would? (no I would never do that) According to our ENV 100 teacher,  all rainforests may be lost by 2090. Yes 2090. Thats really scary.. What will happen to all those animals? Plants? 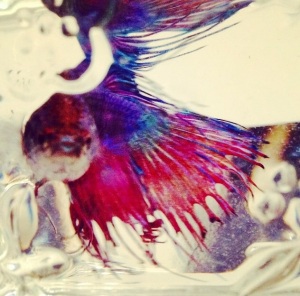 Bigfoot (He is really camera shy)

Morzan(he is still a fry)